Polish Record of Marcin Lewandowski on 2000 m run was the biggest event on 2nd Irena Szewińska Memorial which was held in Bydgoszcz. Many stars including World Champions and Olympic medallists took part in that competition.

We participate in organization of this prestigious event - as a partner and supplier of the equipment. We also want to have an influence on the fact that Irena Szewińska will always be present in athletics.

Lewandowski's run, which took second place with the score of 4:57.09, ended the event devoted to memory of the greatest Polish athlete. - I am very pleased that I did it at home. I am a solider of Polish Army and I managed to beat the 29 year old Record of Poland at the place where I represent my country and army. I am also glad that many people came in those difficult times. People left their homes, they could spend their time in a pleasant way. I am very glad. - Said Lewandowski.

Pole vaulter Piotr Lisek fought beautifully with two-time World Champion Sam Kendricks. Piotr at the 5.90 jump fell on the landing area and didn't move for a long time while holding his leg. He didn't continue jumping after that. - Piotr is a tough guy and he was fine after situations more serious than that. At first sight, it looks like it's stronger muscle tension. If that's true, it won't be anythigh serious - Said Marcin Szczepański, Lisek's trainer.

High jump competition was at great level this year, but unfortunately without any emotions in regard to Kamila Lićwinko's performance who didn't score any height. Julija Łewczenko won with the score of 200 m - The best this year.

Again, Marcin Krukowski showed a great performance this year. The competitor with the first throw of 83.37 gained the first place in the competition. - Great start, great score. I am happy that I won Irena Szewińśka Memorial and beat meeting's best. I did everything I could to honor the memory of Irena Szewińska. - Said Krukowski.

In 400 m women run, meeting's favourite Justyna Święty-Ersetic didn't disappoint and won. Her score of 51.69 didn't satisfy her, though.

- I won this run, so I am happy about it, but it's certainly not the top of my abilities. I can do better and perhaps next week during Polish Championships I will be able to achieve maximum performance. I think that we will have to run faster in Włocławek, as long as the weather will enable us to do so. This score may not give me the winning position and this is the key competition this year. I aim to get the title back. - Święty-Ersetic said.

Meanwhile, Polish Record U18 was set by Kornelia Lesiewicz, the best runner in the first series of 400 m women run.

Ewa Swoboda was second in the 100 m women run, who was outrun by Swiss Ajli Del-Ponte. - After qualification I thought that none of this will happen. 60 m of my run was fine but after that something cut me out. I didn't know what's going on. It was 30 minutes till the final, but during this final the run was great. I am glad that I scored 11.24 because I was counting on 11.30. I am really happy about that. - Swoboda said right after her final run

In the 800 m women run Sofia Ennaoui was beaten only by Noelie Yarigo who was representing Benin. - I am well prepared as far as speed of the run is concerned. In the 1000 m run my performance was great. I am terribly happy about that record. To me, the start here is extraordinary because I love running in front of Polish spectators. My runs are pleasant here in Bydgoszcz. - Said Ennaoui

Adam Kszczot, for sure, was hoping for much more in the 800 m men run. He finished on 10th position. - Mathematically speaking nothing has changed because last year I won here and now I just added 0. It's a joke of course. Well, that's all I can do at the moment. - he said. Poor performance was shown by Konrad Bukowiecki as well. Michał Haratyk won(21.61) 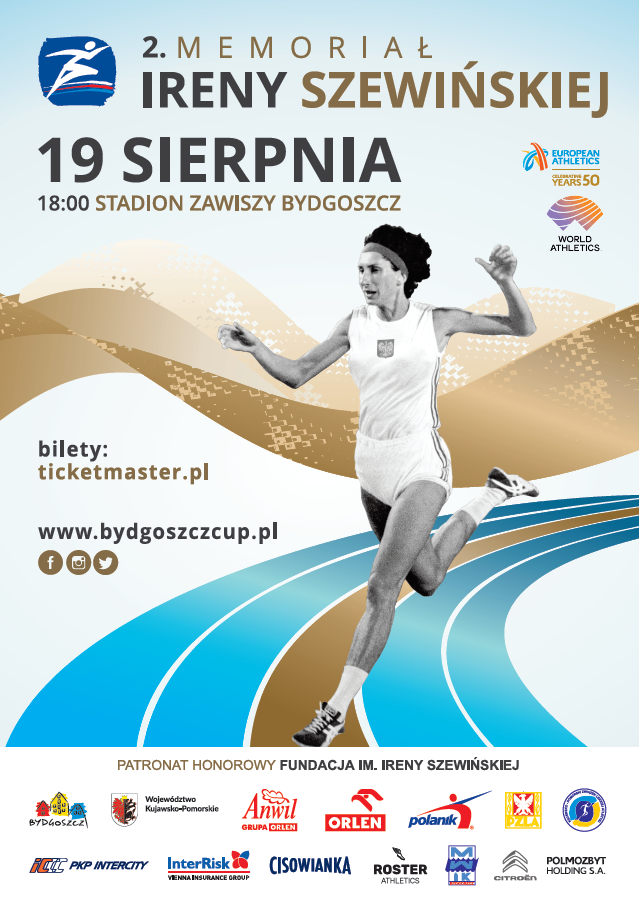