This duo has the power...

"10 years ago we planned on dropping this bomb on you 🤣 this year's changes are continuing, coach and competitor officially in the picture 👊🇵🇱💪 more info soon 😎🙋‍♂️" - that's the post, Paweł Fajdek posted on his profile on 31.10.2020 and he depicted it with a meaningful picture. 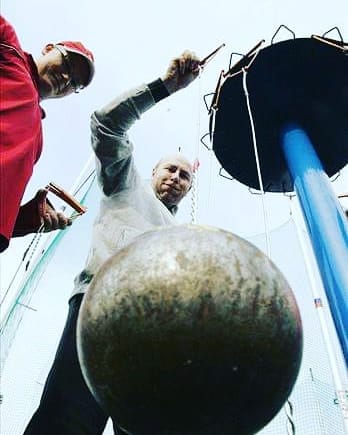 "- We have known each other with Szymon Ziółkowski for 12 years. I trust him. His tips have always been right and correct. I don't have time to conduct some experiments and look for something new. I'm in my thirties. In the coming 9 months, we are going to shape up in a way that we can get desired golden Olympic medal" - says fourfold World Champion in hammer throw Paweł Fajdek (full interview here).

Szymon Ziółkowski is an exceptional character in hammer throw competition: Olympic Champion, World Champion, European medallist and Polish record holder.
Multiple Polish record of Szymon Ziółkowski was beaten by Paweł Fajdek himself in 2015. An interesting fact is that the record was beaten by ZIOLKOWSKI HAMMER BLACK, made by us with cooperation with Szymon. Here is the record throw and a conversation with Paweł.

We congratulate both champions on the idea and we wish productive cooperation!
Our hammers have helped Paweł Fajdek in acquiring champion medals - we believe that now, they will help in beating the world record and acquiring gold in the Olympic Games. In that duo they surely can do it :)